Optimistic Facts to Be Thankful for This Holiday Season 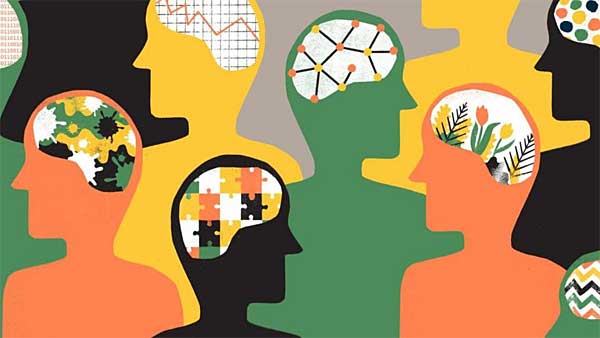 It’s not all bad news — life expectancy and literacy are up, and global poverty is down (Javier Zarracina/Vox)

For most Americans, these feel like bleak times. We have a president whom a majority of Americans want impeached. Overt, old-fashioned racism is publicly visible and powerful in a way it wasn’t only five years ago. Climate change is exacerbating wildfires and other natural disasters and making air in states like California nearly unbreathable.

This is all real, and truly alarming. But it would be a mistake to view that as the sum total of the world in 2019. Under the radar, some aspects of life on Earth are getting dramatically better. Extreme poverty has fallen by half since 1990, and life expectancy is increasing in poor countries — and there are many more indices of improvement like that everywhere you turn.

But many of us aren’t aware of ways the world is getting better because the press — and humans in general — have a strong negativity bias. Bad economic news gets more coverage than good news. Negative experiences affect people more, and for longer, than positive ones. Survey evidence consistently indicates that few people in rich countries have any clue that the world has taken a happier turn in recent decades — one poll in 2016 found that only 8 percent of US residents knew that global poverty had fallen since 1996.

It’s worth paying some attention to this huge progress. The people benefiting aren’t missing it — 50 percent of Chinese respondents in the 2016 poll said they knew poverty had fallen — and you shouldn’t either. Nothing’s permanent, and big challenges like climate change and the potential collapse of liberal democracy remain, but the world is getting much, much better on a variety of important, underappreciated dimensions.

This is probably the most important chart on this list. The extraordinary rate of economic growth in India and China — as well as slower but still significant growth in other developing countries — has led to a huge decline in the share of the world population living on less than $1.90 a day, from 42.2 percent in 1981 to 10 percent in 2015.

That’s a low bar for what counts as poverty, and some development experts argue we should be using a global poverty line of $10-15 a day instead (you can read more in detail about those debates here). But that very debate is a sign of the tremendous progress made in recent decades.

2) Life expectancy is up

The change in global life expectancy from 1950 to present. (Our World in Data)

The increase in human life expectancy is a pretty recent phenomenon; lifespans fell in Europe from 1850 to 1870, and a slower pace of public health improvements (driven by imperial neglect among other factors) meant that Africa’s takeoff started later. But lifespans have doubled or more the world over since.

And the increase has persisted in more recent decades. Female and male life expectancy both increased by about seven years between 1990 and 2017, and the gains were biggest in poor countries in Africa and Asia. Inequalities remain (lifespans in Africa are still a shocking 16.3 years shorter than in Europe) but the gap is slowly closing.

3) Teen births in the US are down

We don’t know exactly why the teen birth rate has fallen so fast — by more than half between 2007 and 2016, and then more in 2017 and 2018 — though as Sarah Kliff has explained for Vox, there are a number of plausible factors. Everything from increased access to IUDs and Plan B to the show 16 and Pregnant could have played some role. But the trendline is dramatic and hugely encouraging.

We’ve come a long way from 1955, when 45 percent of Americans reported smoking in a given week to Gallup, to 2018, when a mere 15 percent do (which is itself a big drop from 21 percent in 2014). And with the FDA working on rules that would ban cigarettes with addictive levels of nicotine, traditional cigarettes could soon be a thing of the past in the US.

The next frontier in the battle against smoking, then, is in the developing world, where progress has been harder. We also aren’t fully sure of the risks posed by e-cigarettes, and whether their harms outweigh their benefits in dissuading people from traditional tobacco products.

5) In the long term, homicide rates have fallen dramatically

The past was a quite violent place. As research from criminologist Manuel Eisner shows, homicide in European countries has been on the decline for centuries. Eisner estimates that in the 1200s and 1300s, Europe had an average homicide rate of about 32 per 100,000. By the 1900s, that rate had fallen to about 1.4 per 100,000. 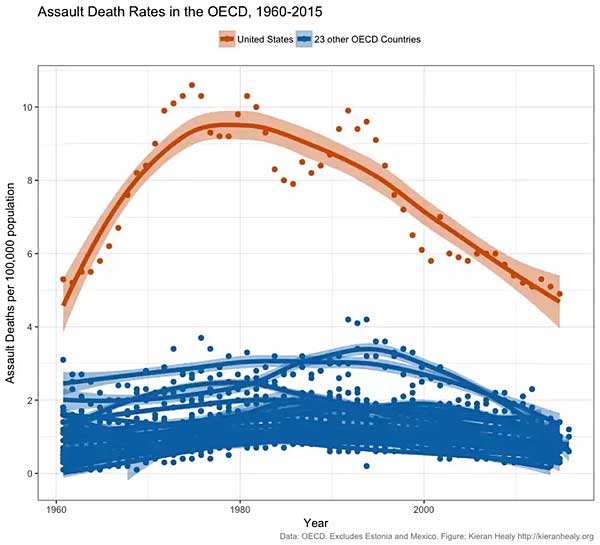 The US has historically been an outlier among rich countries, with an unusually high homicide rate. We still have a much higher rate than Western European countries do, but it has declined sharply in recent decades, as sociologist Kieran Healy’s chart above shows. There were some spikes in the homicide rate in 2015 and 2016, but it’s falling again, and even in 2016 it was lower than any year from 1965 to 2007.

7) More people in the world live in a democracy now 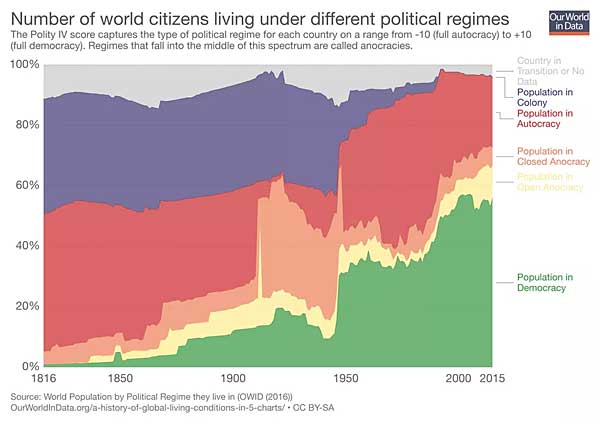 As recently as 1993, most people lived in autocratic states; in the 1970s and 1980s, autocracies outnumbered democracies by a considerable margin, and only about a third of the world’s population enjoyed democratic government. Soviet bloc countries were uniformly dictatorial, but the US didn’t make democracy promotion a particular priority in the Cold War either, allying with brutal dictatorships, from South Korea to Chile to Greece.

But after the fall of the Berlin Wall, the Communist dictatorships almost all vanished, and most of the Eastern European ones were replaced with democratic systems. US-backed military governments in Latin America lost power, and a number of African dictators fell.

Some scholars have expressed concern that we’re entering a “democratic recession”; Freedom House, a pro-Western democracy promotion group, argues, “Democracy is under assault and in retreat around the globe.” But while vigilance in the face of authoritarian threats is totally reasonable, it remains the case, as political scientist Daniel Treisman told my colleague Sean Illing, that, “the proportion of democracies worldwide is at or near an all-time high.”

8) More people are going to school for longer

We still have a lot to do to improve access to education, but even in developing countries like China and India, average years of schooling have been growing swiftly. 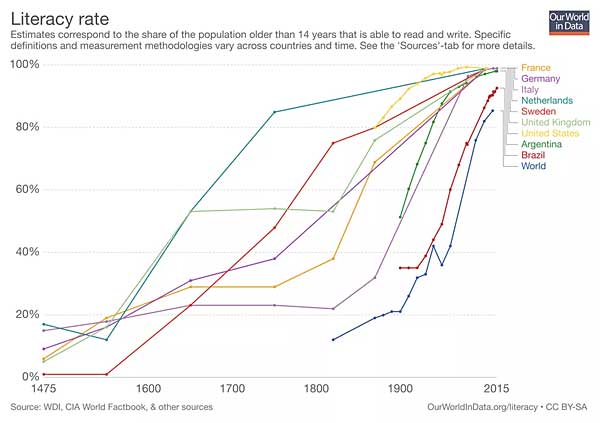 9) Solar energy is getting cheaper

Climate change is one big area where we’re not making progress, and things are getting considerably worse. There’s no sugar-coating that. One bright spot is the declining price of solar power, which is fueling a rapid increase in adoption. Solar and wind are now cheaper per megawatt hour than gas or oil (and have gotten more so since the above chart), though better batteries are needed if the two are to become primary sources of energy.

See the original at Vox